Murals and Masks: Venturing into the Unknown 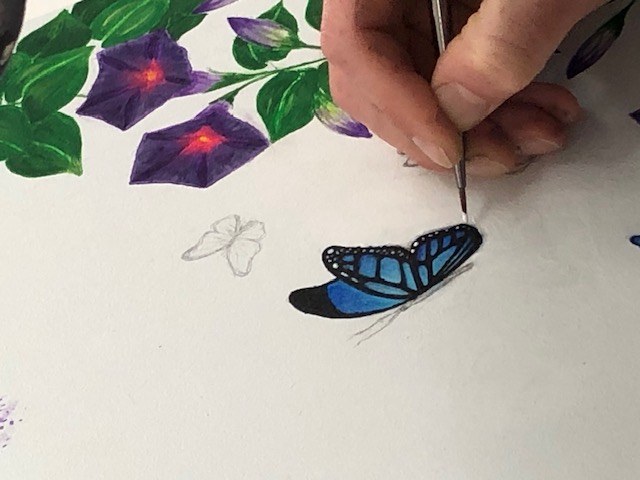 “Life is the art of drawing without an eraser.”  ~John W. Gardner

I am in Connecticut visiting my eldest son, who is an artist.

He had recently moved into a new studio space and completed two very detailed murals; I arrived stateside just in time to relax with him during a well-deserved week off.

Besides playing with his dog, Finn, catching up on sleep, and watching some movies, he thought it might be an interesting idea to do a project together.

“That would be cool—do a mural together,” he mused. “I want to add more organic elements into the next design, and you’re good at that—flowers and stuff.”

Sure, I thought. That would be fun. I was, back in the dark ages, once an art major and have drawn these particular morning glories, these leaves, over and over on many creations, in colored pencil, my favorite medium.

But the mural he wants to paint is on the side of a building he can see from his studio which he estimates to be 25 feet high by 80 feet wide. I estimate it to be huge, the kind of huge that requires scaffolding and scissor lifts.

So, for the past week, we’ve been working side-by-side on a to-scale painting that, once finished, he’ll submit as a concept piece for this particular wall.

As well, being in the States, mask mandates are loosening as the U.S. vaccinations increase, and we could both feel it, an energy of expansion underscoring our sense of creative freedom.

Coming up with the design on a 48’ wide x 16” high canvas was fun and easy—but the idea of scaling it scared the bejesus out of me. Another medium—spray paint—and more learning, more practice, more risk, more paint, more… everything.

And I realized something: I have always done small, small detailed work, calligraphy and the like.

So, in the middle of joyfully painting alongside my son, as soon as I thought that thought, I managed to suck all the joy right out of the moment with concerns about how’s somewhere off in the distance, out in an amorphous, imaginary future.

I leave on Monday. Our creation is almost complete, and it has been a thing of joy: Mike and his mom made art.

If he gets a green light on this concept down the road, I guess I’ll be practicing how to make flowers five feet tall—with spray paint.

The idea of expansion after so long a period of contraction is both exhilarating and at the same time somewhat terrifying.

I suspect that’s true of any step into the unknown.

Whether it’s a mural or a mask, it’s probably a good idea to be gentle with ourselves as we venture forth—and attempt to paint bold visions with unfamiliar mediums on unknown walls.

“The main thing is to be moved, to love, to hope, to tremble, to live.” ~ Barbara Januszkiewicz