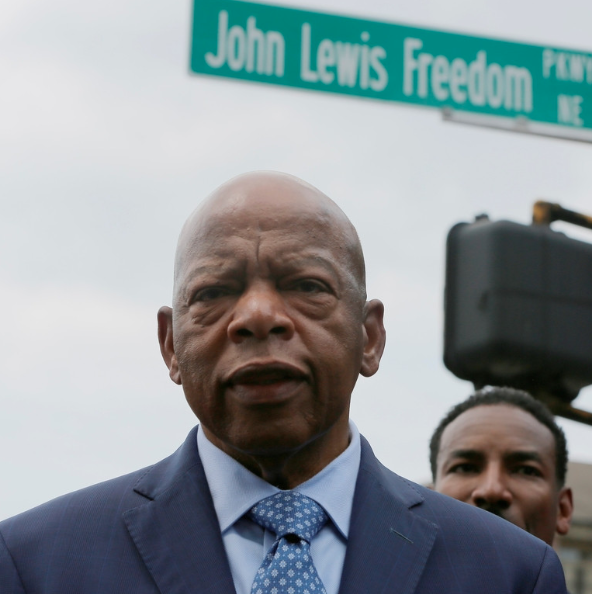 “People follow leaders by choice. Without trust, at best you get compliance.” ~Jesse Lyn Stoner, author of Full Steam Ahead

John Lewis passed away on Friday. He was eighty years old.

I had planned on writing a lighthearted and pithy blog this week, something amusing, about the altered priorities that have been revealed through the pandemic.

Because a great man has died and I suspect we shall not see his like again anytime soon.

For my Canadian friends who may be unaware, John Lewis was a civil rights activist who walked with Martin Luther King Jr.

He was a U.S. Congressman, and a standard bearer for equality, justice, truth and freedom. He was called the “conscience of Congress.”

Barack Obama once said that his election was a result of John Lewis’s efforts, that his presidency “stood on the shoulders of John Lewis.”

As a young man, he stood up, spoke out and was beaten for doing so. He continued to stand up and speak out his entire life.

He was passionate and committed, and led by example: His words and actions matched; people followed him by choice.

He was, and will remain, a person I admire, someone I will remember, someone who carried himself with dignity and whose very being broadcast integrity.

And though I never met him, from somewhere deep inside me there springs a sadness so profound as to blindside me with its depth; like a riptide in whose current I have been caught, there is no buoy of pith to grab hold of.

There is no lightness in the passing of so great an example of what humanity could be.

There is only the stark revelation of our pandemic priorities: truth, trust, transparency.

And the eternal march towards liberty and justice.

“Whatever you do, do it with faith, and hope, and great love. And never give up.” ~John Lewis