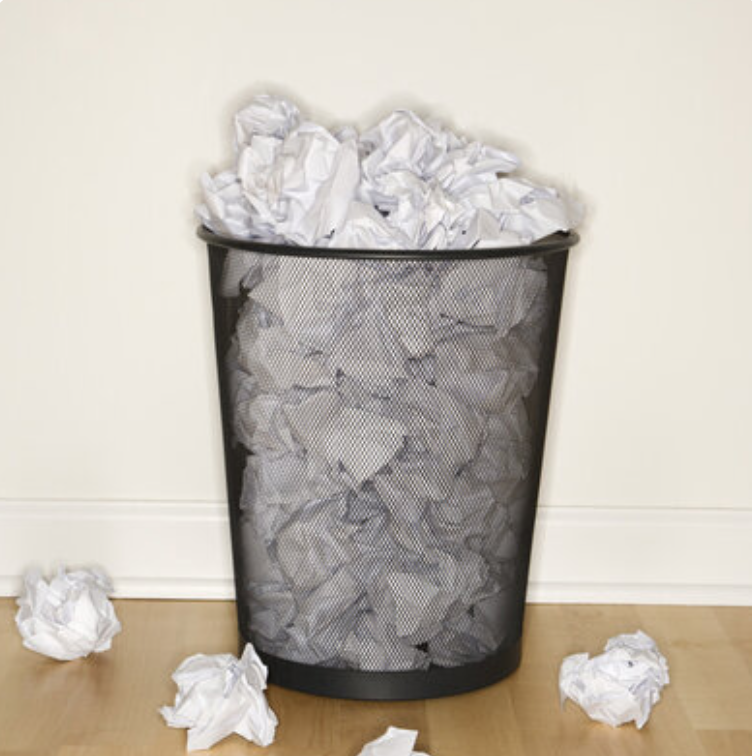 “Benjamin Franklin said there were only two things certain in life: death and taxes. But I’d like to add a third certainty: trash.” ~Ruth Ann Minner

My mother, whom I am visiting at present, complained that she had a bunch of “unread’ messages recently show up in her in-box e-mail—over a thousand of them—all of which were old.

Probably a server issue, I thought.

I offered to help her attend to this source of frustration, as all things technological overwhelm my mother; she will be 92 this year. (I’m not much better at the technological stuff, but I am a lot younger, so, there’s that.)

Her beautiful iMac, with a cluttered desktop, was sluggish in responding to any command.

Turned out she had a lot of open tabs. A lot of them.

She’s an analog woman living in a digital age.

I tried to explain why keeping too many windows open slows down her computer’s ability to respond, attempting an analogy of researching a paper (she’s an academic).

“Each tab is like an open book on your desk,” I began. “Too many open books makes it harder to organize your thoughts and notes, in order to write that paper. Your desk gets too cluttered to find what you’re looking for.”

After closing all open windows, we undertook the email issue.

I showed her how to choose a dropdown box that allowed for her mail to be sorted by different categories, and we choose “unread”.

I showed her how to highlight one message, click “command A” and all the messages (1800+ of them) lit up. And then how to delete all of them at once. And I showed her the difference between a right click and left click.

No one had ever showed her those things.

I practiced patience until one too many interruptions and non-sequiturs caused me to resort to using my “mommy” voice with my own mommy; she wanted to learn but not listen.

E-mails from the beginning of time. E-mails she had thought she had deleted.

But no, since no one had ever told her you need to delete the email trash file, there they sat. Since the beginning of time.

“But I deleted all these messages, I did. Long ago!” she assured me, a look of consternation on her face.

The concept of double-deleting seemed to elude her.

“Mom, when you’re in your bathroom and you blow your nose, you throw the tissue in the waste can next to your sink, right? And then what happens?”

I helped out. “Eventually, you empty that trash can into the larger can in the kitchen—”

“Oh, yes!” She brightened. Of course she knows to do that.

“—which gets taken to the curb for pick up by the trash truck,” I continued. “This “trash” file (I put the curser over the folder itself to show her) is like your trashcan. You think you’ve been dumping it every day, but you forgot to bag it and put it outside.”

We deleted all those messages. I felt that I had been able to transfer enough information that she could manage double-deleting going forward.

As I got up from my chair beside her once she’d had enough, she chirped, “Oh, I really like that “command A” thing. I’m glad you showed me that!”

And there’s her take-away. That, and the tissue wads.

I don’t have a handy category for this one.

It’s just a small snippet of my life right now, and a metaphor, I think, for our personal trash folders, and the old clutter we carry around, unknowingly, because no one ever showed us how to double-delete it.

But it can be done.