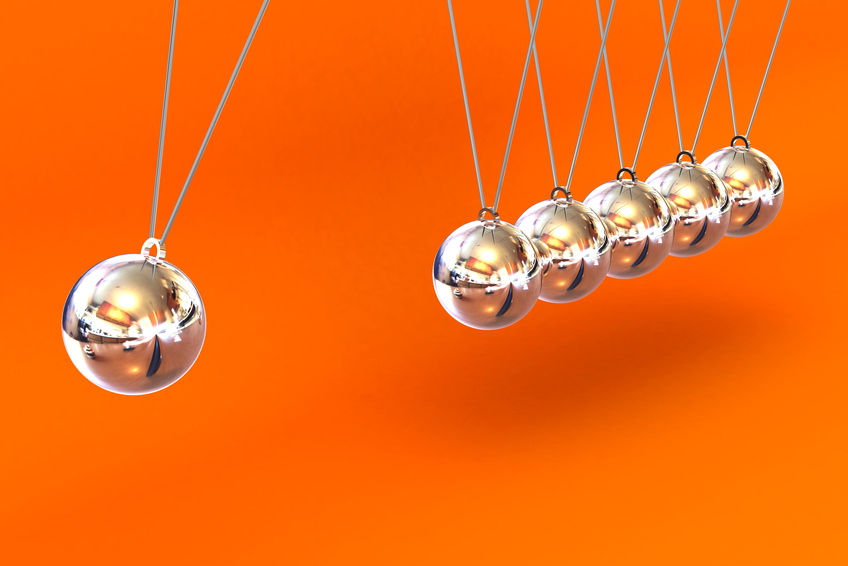 “Wholeness is not achieved by cutting
off a portion of one’s being, but by integration of the contraries.”
~Carl Gustav Jung

A paradox is a seeming contradiction: think homeopathy.

A polarity, however, is “the possession or manifestation of two opposing attributes, tendencies, or principles.”

For a visual think of Newton’s Cradle.

And what’s got me thinking about polarities is the way they show up in people’s lives. In everyone’s life, mine included.

There are those who would like to excise aspects of themselves, they get so frustrated with certain things they say or do. And companies who think the same about a colleague or two; they’d love to see them run over by the bus and would be happy to do the throwing.

It doesn’t work that way. Wish it did, but amputation as a strategy for progress is shortsighted.

Integration is the answer, not amputation. But integration requires more effort as well as more patience, compassion, understanding and effort.

It’s hard. Which is why so few folks bother.

I’ve learned over the years that swinging from one end of a spectrum to its polar opposite is often the way of learning and growth: we alternate back and forth between two extremes until, eventually, we find our own operational middle point.

It’s like adding salt and pepper to a dish: too much or too little can spoil the result depending upon personal taste.

Early in my career, fresh-faced and having fallen in love with the heady experience of being heard from a stage, I would sometimes receive feedback that I had shared one too many personal examples to clarify concepts. TMI. It stung and I vowed to stop.

My results tanked; I was not “being me” and my groups could sense it. So, I began to include some personal examples and my results shot up again. Over the years, eventually, I found the proper balance (I hope).

Such is the trajectory of learning: like an airplane, you’re off-course 80% of the time, but ultimately arrive.

While we cannot eliminate the very things that make us who we are—both the positive and negative natural tendencies—we can learn to control, regulate and maximize them.

Here’s how you can tell if you’re really on a path toward integration: at some point you want to give up and you begin to think that amputation would be a blessing.

When that happens, pat yourself on the back.

You’re well on your way toward character wholeness.

“People desire to separate their worlds into polarities of dark and light, ugly and beautiful, good and evil, right and wrong, inside and outside. Polarities serve us in our learning and growth, but as people, we are all.” ~Joy Page