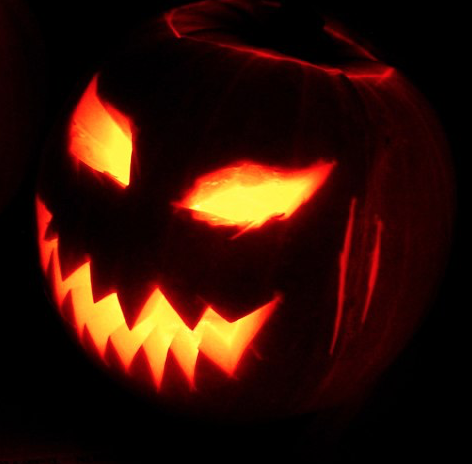 “We make up horrors to help us cope with the real ones.” ~Stephen Kings

It’s that time of year again, when we set our clocks back and days become shorter and darker and people dress up for Halloween.

I know folks whose whole year revolves around their annual Halloween party.

Outrageous outfits, clever get-ups, black cats, cobwebs.  And candy. Don’t forget the candy. That was the whole point in my mind as a child, not the dressing up. (I never did like dressing up, not for costume parties or Halloween or even black-tie events.)

What I find fascinating though, is not our over-the-top retail celebration of the day, but rather the evolution of the holiday and its traditions, how it morphed into what it has become.

Way back in the eighth century, Pope Gregory III designated November 1st as All Saints Day, a day to remember and celebrate saints.

I have it on good authority that saints were, like, good people who did good things. So, the Pope thought he’d do a good thing in remembrance of good people.

Anyway, the evening before All Saints Day was then known as All Hallows Eve, and later, became Halloween.

Originally, All Hallows Eve was grounded in the end of the fall season when the fields had been harvested and the townspeople gathered to celebrate and share in their bounty.

The tradition contained many of the traditional Celtic pagan practices, a time when folks thought spirits lived everywhere. Later, Irish immigrants brought those traditions across the ocean, and they’ve evolved into the seasonal retail bonanza and sugar highs we now endure each year.

From carving pumpkins to wearing costumes, from black cats to flying witches, many of our traditions find their roots in our human desire to ward off evil spirits. (You can read the same information source I used, The Library of Congress.)

Seems that as a species we’ve been scared for a very long time.

Which is why horror films baffle me: Why do people choose to feel terrified, and actually pay for the experience?

Because they enjoy it, that’s why. They enjoy the faux feeling of aliveness that fear engenders. But it is fleeting, that fear, and there are better ways to feel alive.

And all kinds of mischief are on display on Halloween, from toilet papered trees to flattened tires and worse. Is it the costumes that provide cover for the bad behaviour?

When did we morph from celebrating saints and their good deeds to amplifying hooligans and their bad deeds? When did warding off bad spirits wander toward promoting pranks?

When did All Hallow’s Eve move from observing a harvest and sharing it with others, to demanding food from others, or else?

It seems that in life it’s always our choice, there’s always a “trick or treat.”

And I think that maybe too often we choose tricks over treats in life. As though we don’t deserve the good stuff unless we pay a price for the bad stuff our unconscious keeps track of for us.

We may not mean to—I mean, that doesn’t make sense, does it, to push away something pleasant? But we do. We choose the bad stuff, unconsciously, until we discover that life is less about warding off the bad, but rather about embracing the good.

So, maybe this Halloween, in the midst of the busy-ness of the preparations and the dressing of wee ones and, you’ll think of All Hallow’s Eve’s original intention: to celebrate a bountiful harvest and make peace with whatever spirits may exist.

And remember you’re good enough for any treats that await you.

“Halloween wraps fear in innocence, as though it were a slightly sour sweet. Let terror, then, be turned into a treat.” – Nicholas Gordon